Summer’s here and cider too, but not all are aware of Bulmers’ history. Bulmers Cider, is known to the people where it is locally produced in County Tipperary as this name. However, in other places of the world, it is known as Magners. The cider was established in 1935 by a man named William Magner. He produced his own cider at this factory in the mid-1930s.

In 1937, Magner teamed up with the well-established H.P. Bulmer Company. He got the right to produce under the English Bulmer’s name in Ireland. After ten successful years, H.P Bulmer bought the other 50% stake from Magner in 1946. The cidery would soon change hands yet again due to a legal dispute. They were forced to sell to C&C Group. This is a soft drinks and cider company, then jointly owned by Guinness and Allied Breweries.

When sales were continuing to boom for the new owners of the company, they looked to expand their business. The problem was, H.P. Bulmer still owned the rights to the name everywhere other than Ireland. This is where the name Magners took off. They brought Magners Irish cider first to Spain, then Germany, and then the UK.

The cider is still produced today in Annerville, where it moved from the original town of Clonmel. Bulmers or Magners is made from 17 different kinds of apples and left to ferment and mature for up to two years. The cider can now be found in bars throughout Europe, Asia, North America, Australia, and New Zealand.

Stop by our Main Bar at The Church where we have Bulmers on tap or in the bottle! We don’t just have the original Blumers cider here either. In addition, we have some of the Bulmers flavored ciders in bottles. 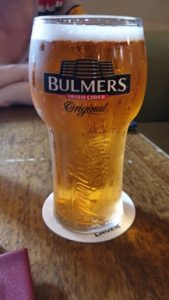